Here are Fun Facts about Beach Sand that the casual visitor to the edge of the land does not realize. First of all not all beach sand is equal or the same. There are white sand beaches that are mainly old coral beds that have been beaten down by waves until only small particles are left. They look pristine and can be found in tropical areas that have large concentrations of coral just off the coast like at the South Pacific islands.

At the other end of the spectrum there are black beaches. These beaches are created from material that flows out of active volcanoes. When the hot lava hits the cooler ocean water it shatters forming what resembles black sand. Hawaii has many of the best black sand beaches in the world. There are also others in the Philippines and other volcanic islands in the Pacific. 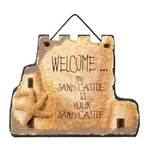 For the most part, Americans think of tan or lite brown sand as what they expect to experience when visiting a beach. This is true for a majority of the US coastline. This sand is made of silica mainly which is the second most common element on the planet. Only oxygen has a greater concentration on the earth. Silica sand is formed by the ocean waves hitting the shoreline eroding rocks that are present there.

One of the unique features of quartz or silica sand is that many think they hear singing or squeaking when they walk on it. This can occur when the sand particles are mainly spherical in shape and must be similar in size. A low level of humidity must also be present. The sound is generated when a person walks on the layers of sand and the particles slide against one other. The sand has to be really clean for this to occur. This phenomenon is becoming a rare occurrence today, because small dust prevents the spheres from smoothly rubbing against each other and the sound is not produced or it is muffled.

Beach sand is the same but yet it is different around the world. The one commonality they all have is that the size of the particles is 1 to 0.5 mm is diameter. The older the sand particle is, the rounder it becomes. This is the effect of the oceans and the beating of the waves on the beach. No matter if it is natural or manmade, all objects located on the coast lines around the world will eventual become sand. This is a fact of nature that cannot be changed.

Because many of the visitors to a beach expect sand to be there in large quantities, many principalities that rely on tourism import sand from quarries. This has to occur because of erosion due to time and storms. It is most common in America to help keep the coastal cities revenue at their maximum.