One of the many fun facts about Flip Flops is the origin of the name. This is simple; it is the sound the foot makes when a person wearing them walks. While this name is common in America and its culture, this form of foot ware is called by many different names around the world. In the tropical islands of the Pacific they are referred to as slippers. Other names are slip-ons, slappies and open toed sandals.

Americans consider the flip flop a causal form a foot ware to be worn at the beach or at home. In the tropical islands it is the most common form of foot wear by the natives that wear them everywhere. They are inexpensive and allow for a person to slip them off easily before entering a neighbor’s home, yes that is the tradition.

The introduction to American culture of the flip flop occurred back in the 1950’s, but they have been around for thousands of years. There are even cave drawings of people wearing them that date back to the Stone Age. They are also present in Egyptian murals dating to 4,000 BC. American troops brought them back from Japan after the Korean War ended as souvenirs. This started the fad of the flip flop in America. 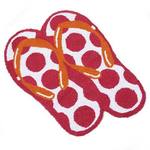 In the past they have been made out of local material. In Ancient times the flip flops were made out of papyrus and palm leaves. In Africa they are made out of animal skin, India uses wood and China and Japan they use rice straw.

Today the flip flop is made of man-made material. It is similar to a soft rubber foam that is water resistant and can be worn for an extended period of time. They come in a wide variety of colors but the design is still basic. The Y shaped straps are anchored between the 1st and 2nd toe. This is the way the Greeks of ancient time wore them. The Romans had the anchor between the 2nd and 3rd toes. The Mesopotamians had the anchor between the 3rd and 4th toes. The Indian version is Asia Minor only has a toe knob between the 1st and 2nd toe with no straps.

While the flip flop is not known to be a good walking shoe, many cultures have adapted them for everyday life. What is amazing is that in the tropical islands where basketball is played, the players are not only wearing flip flops but able to run and jump with them on.

The only known controversy involving flip flops occurred when the US woman’s lacrosse team visited the White House back in 2005. Many on the team were wearing them and the media made a big fuss about how informal and disrespectful those members were. What was forgotten about was that when the Dalai Lama visits the White House, he is wearing flip flops.

The wondrous flip flop is a causal pair of foot ware that allows for your feet to breathe while still protecting the soles of your feet from the hot pavement. They may not be formal foot ware but in many countries around the world they are the most common of all shoes.