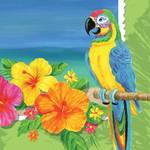 Playing with Fun Facts about Parrots is one of the better ways for you to get to know about these feathery creatures. There are 372 different types of parrots which inhabit tropical rain forests and subtropical regions around the world. Those seen outside that area have been transported there by humans to be used as pets.


Parrots have been known to mimic sounds they hear and can be heard up to a mile away. This includes human sounds. The Grey Parrot has also show it can do more than just mimic by associating words and making sentences. The parrots are considered one of the most intelligent types of birds in the world. For communication the parrots use squawking and screeching sounds in the wild.


Parrots are not like other birds in the animal kingdom when it comes to differences between the sexes. Most wild birds are created with the females in bland colors so they can hide easier than their male counterparts. This is not true with parrots. The males and females are exactly the same for each species and since their sex organs are so small, most of the time a bird’s sex is determined by a blood test.


Parrots come in a wide variety of sizes and colors. The smallest is the pygmy parrots that are just over 3 inches high. The largest is the Hyacinth Macaw which grows to lengths of over 40 inches. The average life span of a parrot is about 70 years but Charlie; Winston Churchill’s parrot lived to be 104 years old.


Most parrots are not like other birds in that they do not build nests for their young. Most find holes or cavities to place their eggs. The most common is a termite nest where both sexes help to dig out a cavity for the nest. The exception is the Quaker Parrots which build nests that are joined to other nests in forming a small condo type assembly. These communal nests have been known to reach a weight of 200 pounds.


The parrot also eats while standing on one leg. The other is used to place food in their mouths. It has been noticed that some Parrots eat with their left claw while others their right one. This makes them left and right handed just like humans.

The parrots in the wild eat a variety of seeds, fruits, nuts, nectar, flowers and insects. Some have even been known to eat meat from prey they kill, but this is a rare event.


While the many different types of parrots do come in a wide variety of colors and are beautiful, their natural instinct to screech and squawk constantly makes them annoying to be owned as pets.


These are just a few of the fun facts about parrots. They are one of the most beautiful creatures in the sky above us.