One of the many Fun Facts that TropicalBreezeDecor has found about the Sand Dollar is that this is actually a living creature. Most people are aware of what is left when a Sand Dollar passes away and washes up on the shoreline. It is white and has a star in the middle of it. When this creature is alive it looks very different. It is covered with purple spines that hide the star from being seen. Also present on the surface are tiny hairs. This is how it moves food to its mouth which is located on the bottom of its surface. Their main source of food is plankton. To move these same spines act like feet so they can travel in the sea bed. They have 5 teeth in their mouth and can chew for 15 minutes before the swallow. Most meals require 2 days before digestion is complete. 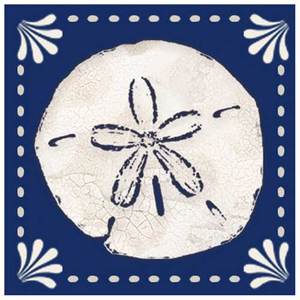 If you see a sand dollar in the tropical paradise you might be lucky enough to witness how they feed in calm waters. They are perpendicular to the water with one edge buried in the sand. If the waters are too rough they lay flat on the bottom. Adult sand dollars have a heavy skeleton so they can rest on the bottom and not be moved by the oceans current. For younger sand dollars, they must weigh themselves down to remain stationary. This is done mainly by swallowing sand.

The typical sand dollar spends most of its life close to shore. The deepest they are known to exist is in 30 feet of Tropical water. They grow to be about 3” in diameter and only 3/8” thick. They reproduce like most other animals with the females releasing eggs into the water and the males covering these floating eggs with sperm. In some instances when there is a need they can reproduce by cloning themselves in an asexual process. It has helped this species to survive since the time of the dinosaur. They generally only live for about 8 years but some live as long as 10 years.

To breathe, the sand dollar uses the spines on its surface to bring in water in which the oxygen is extracted by the skin. Another unusual fact is that the Sand Dollar is a social creature. They live in large groups together covering just a square foot to miles of the ocean bed.

It was once believed that the sand dollar was the type of money mermaids and the ancient Atlantians used. Today we know this to be just myth since it is a living creature.