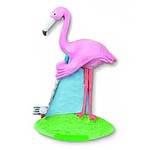 Learning the Fun Facts about Pink Flamingos is an enjoyable time for most. What is surprising to most is that the hatchlings of the pink flamingos are grey in color. The adults turn pink and shades of scarlet from the food they eat. This is from the algae, diatoms and crustaceans that contain carotene they digest.


The adult flamingo dips its beak in the mud and water with its head upside down. They can do this for up to 8 hours a day so they can get enough to eat. With each mouthful they shake the mud and water out of their mouths while retaining the food they have caught. They also hold their breath while feeding.


Unlike most other birds, the pink flamingos have webbed feet similar to ducks and geese. This is why they are considered water fowl. They are very graceful swimmers but usually just wade in the shallows where their food source is located.


Just like parrots, both males and females are similar in their appearance and size. Each breeding season the female lays only one egg and both parents help to incubate the egg. What is unusual is that both parents feed the young by excreting a milk lick substance from their mouths. This has to be done until the chick’s bills develop enough for them to feed on their own. The pink flamingos are generally seen in colonies of 15 to 50 birds but some have reached into the thousands before these modern times. This communal living has several advantages including protection from predators. This is necessary since they feed with their heads upside down and under the water.


The top speed of a flamingo is about 37 mph. They can also travel up to 300 miles in search of a new food source in a single day.


The size of flamingos range from 3 to 5 feet tall and can weigh up to 8 pounds. They also live on average for 20 to 30 years in the wild. Some of them that have been in captivity have lived up to 80 years.


Most people think of a pink flamingo as standing on one leg. The reason the birds do this is unknown but a common sight. What appears to be its knee that can bend backwards is in actuality its ankle. The knee of the flamingo is near it body and is hidden under its feathers so it cannot be seen.


The pink flamingos can be found in both North and South America along with Europe, Asia and Africa. This is a very adaptable bird species and has been known to live in volcanic lakes where the water is hot along with icy cold lakes high in the Andes Mountain range. The preferred area to live is in shallow muddy flats where the food they like to eat is readily available.


The graceful and beautiful Pink Flamingo flies to the sky in large colonies and is a wonder and beautiful spectacle to witness. The largest flock ever recorded was over 1 million in one group.