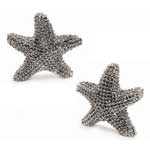 A fun fact about Star Fish is that they are not a fish at all. They are relatives of the Sand Dollar, Sea Urchin and Sea Cucumber. A star fish has another name of which is Sea Star. This is because most of the 2,000 species of sea stars have 5 sections that resemble a 5 pointed star but they can have as few as 4 arms or as many as 40 and can weigh up to 11 pounds each.

The Star Fish is a living creator that has no eyes, gills, blood or brains. Even without eyes they can sense light thru eyespots that are located at the end of each of their arms. Instead of what most people consider blood, a Star Fish has a vascular system in which sea water travels throughout their body. This is how they transport the material they need to the different sections of their body.

Star Fish eat in a very unusual way. They can eat small fish but usually enjoy clams and mussels that are also on the sea floor. They have the ability to wrap their arms around the crustaceans and slightly pry it open. They then extend their stomachs out of their mouths into the opening to devour their prey. This mouth is on the underside of the star fish while the other end of their digestive system is on the top of their body in the middle. See the picture of our star fish salt & pepper shakers above.

Another very unusual and fun fact about the family of star fish is that they can regenerate parts of their body. If one or more of their arms becomes detached, it will grow back. The parts that are separated from the main body will also then generate other arms and become a new animal. This is possible because a majority of the vital organs of a star fish are in the arms of the creature and not the main body. This regeneration takes time and could last up to a year per arm that is needed.

To get around the star fish have very small and numerous tube feet. In order to make their tube feet move, the star fish use the sea water in their vascular system to inflate them like little baloons. They are only located on the underside of the sea star.

For protection the sea stars have a tough exterior made of calcium carbonate. The surface is covered with tiny spines and thorns that have a rough surface. This persuades predators from attempting to make breakfast out of the soft inner tissue.

There are both male and female star fish. It is not unusual for either the male or the female to change genders when needed.

The wonderous star fish is unlike any other creation presently on the planet. It ability to regenerate, change genders and move its vital organs out of its body make it a unique animal.

by Douglas GrayBack to the Articles menu page